The Sanctuary at Browning Farms (with a grant from Spay Neuter Services of Indiana) recently spayed and neutered three older kittens. The kittens are now in need of good homes. They are fairly wild and will definitely need the Cat Whisperer to take them in!! 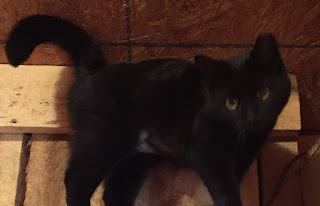 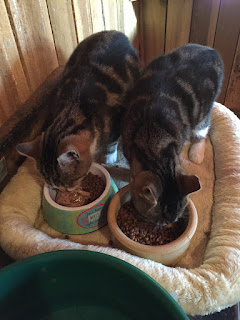 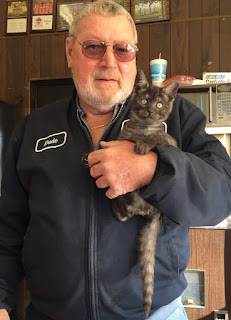 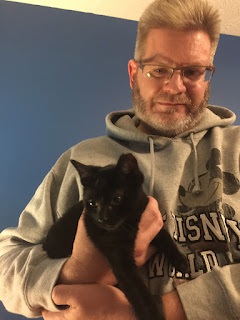 We have been busy the last few months picking up feral cats and taking them to SPOT to get them spayed or neutered. We feel that spaying and neutering the animals in Owen County should be a major priority of The Sanctuary. Not only will spaying and neutering improve the lives of the animals who are being fixed, it will prevent hundreds of unwanted animals from populating local humane shelters or spreading disease in the wild.

Along the way of our feral cat spay and neuter mission, existing feral kittens have been picked up and brought to The Sanctuary. Pam recently brought two kittens home to be tamed, vet checked, neutered, and adopted out. Thanks to Dude Bandy (gray kitten) and Kevin, Marla, and Anna Rademachir (black kitten), Sherlock and Barney were taken off of the street and placed into loving homes.

We appreciate the donations that we receive. While a grant from Spay Neuter Services of Indiana has covered the cost of spaying and neutering, the medical expenses to ensure that each cat is healthy and ready to be returned to the wild or adopted out have not been covered. Depending on the condition of the animal, vet costs can run in the hundreds of dollars.

We are currently looking for good homes for kittens!  Please contact Pam (812)821-0826 if you or someone you know is willing to adopt a kitten!

Peace from The Sanctuary at Browning Farms!

Posted by The Sanctuary at Browning Farms at 6:17 PM 1 comment: 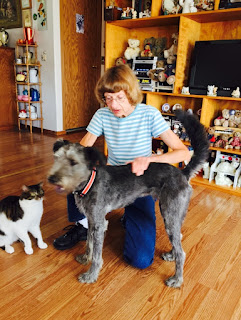 This Labor Day weekend was an exciting weekend for the sanctuary.  Not only did we manage two adoptions (newly named Simon moved in with Sue Lewis and Honey the Cat found a great home with Emily the Math Teacher), but we received several vouchers for spaying/neutering Owen County animals.  The vouchers were given to the sanctuary by Spay-Neuter Services of Indiana (SNSI).  We really appreciate the assistance and are getting busy organizing our second feral cat spay-neuter marathon!

On that note, The Sanctuary at Browning Farms is setting up a special account to pay for spay-neuters.  It is called the Fifi account and has been created to honor the late Fifi Hawkins, Pam's beloved dog and traveling companion.  Please make a note when donating to the Fifi fund so that your donation can be earmarked for spaying or neutering dogs and cats in Owen County. 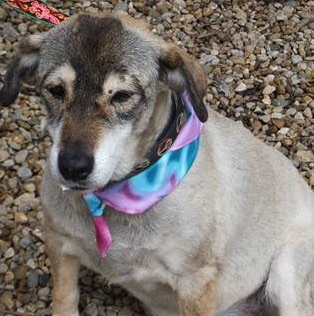 The Sanctuary at Browning Farms has been receiving items for another fundraising garage sale.  The sale will be held at Ed's Body Shop located at 1956 State Road 46, just past the Spencer Walmart, on Saturday, September 12.  We wish to thank everyone for their wonderful donations!  Please come out and support the animals!

Another fundraiser that is coming up will benefit the Monroe County Animal Shelter and the Sanctuary at Browning Farms.  It will be held at Bryant Park on Saturday, September 26. Edward Jones is sponsoring this fundraiser and will be serving sandwiches.

Because of all of you, we are able to improve the lives of animals in Owen County!


Posted by The Sanctuary at Browning Farms at 5:55 PM No comments:

On July 20, 2015, we lost Fifi to kidney failure.  It was one of the saddest days of our lives. Fifi was Pam's soul mate and traveling companion of fifteen years.

The day of our wedding (July 11), we noticed that Fifi was not feeling well. We got her dressed in her tie dye scarf and she put on her best  face as she walked up to the stage and watched the ceremony. Afterwards, we put her in the camper so that she could stay cool in the air conditioning.

Fifi awaiting her turn in the wedding procession
July 11, 2015

We took Fifi to the vet on Monday. Blood work confirmed that Fifi was in the late stages of kidney failure. We dejectedly took her home and decided that we would postpone our honeymoon trip to Siesta Key while we gave Fifi subcutaneous fluids.

By Wednesday Fifi seemed to be improving. She had a little more energy and would eat a few bites of chicken and rice dog food without vomiting it back up. With an ok from the vet, a drip line, and several bags of fluid, we headed to the beach. 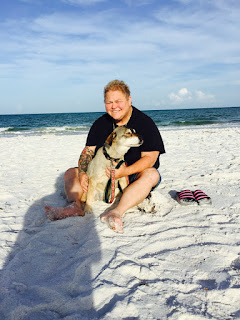 Fifi enjoyed her days at Siesta Key. She walked on the beach and visited with Pam's nephews and sister. We gave her fluids twice a day and fed her whatever she would eat. Sometimes it was chicken, sometimes steak or ribs. It became increasingly difficult to predict what she wanted. She turned her nose up at the steak she had eaten the night before. I walked to the local market to purchase hamburger and came home to fry it up, only to have to walk back to the market to buy turkey. Sometimes she would keep the food down and sometimes she would throw it up.

Pam knew that her days with Fifi were limited. She would not let Fifi suffer. We took her to Dr. Farrar the Saturday we got back. Dr. Farrar agreed that it was Fifi's time to go.  She gave Fifi one last bag of fluids intravenously and told Pam that she would come to the house on Tuesday to euthenize her. By Monday, however, we knew that Fifi should not go on. Pam said her goodbyes and we took her to Spencer, where Dr. Farrar awaited us.

Fifi was cremated and a small amount of ashes were placed in a locket  that Pam can wear. Fifi will never be forgotten.

Posted by The Sanctuary at Browning Farms at 6:24 PM No comments:

This summer, we took on two Pomeranians who had been left outside without food or water.  They finished their treatments and were up for adoption.  My friend, Susie, adopted Carmella.  They love to cuddle and go for long walks.  Susie sometimes has to carry Carmella home (she is spoiled).  Since they live next door, Carmella runs over here for visits.  Pam and I like that.

Carmella's daughter, Diamond, went to a friend of Pam's in Ohio.  Diamond is having a great time in her new home, too.

This is what makes rescuing so rewarding.  Finding the right home for the right dog, cat, goat...........

We have also taken in a tiny Chihuahua named Hillary.  Hillary's mom died a couple of weeks ago and her dad is not in good enough health to take care of her.  We are looking for the perfect home for her, but in the meantime Hillary is sleeping on my chest at night and sitting pretty for treats.  She is a sweet little girl!!!!

More to come....
Posted by The Sanctuary at Browning Farms at 3:15 PM No comments:

This morning we found out that we lost a friend.  Roxanne, Honey's mom, died on Monday, July 6.  Roxanne was a trooper when it came to going out on rescues.  She was bitten by a dog and attacked by a goose!

One of the last rescues included six wild horses, three feral dogs, and a wild attack goose.  Pam and Roxanne traveled to the site to assess the situation.  A woman had died and her boyfriend had just gone out to her house and thrown food and water to the dogs.  Rascal, a little black dog, was matted beyond recognition.  He couldn't wag his tail because it was matted to his body.  His eyes were hidden under a matted mess.  He was extremely shy.  The other two dogs were inside the house on top of piles and piles of garbage.

The horses hadn't been touched in years and there were stallions in with mares.  Needless to say, the mares were pregnant.  The goose was walking around the yard next to the dilapidated house - honking, hissing, and raising his wings in an intimidating manner.

Roxanne had to go to the bathroom and there wasn't a working toilet in sight.

Roxanne went to the back of the house.  She pulled down her pants while grabbing onto a flower box that was attached to house so that she could steady herself.  The rotten flower box gave way and Roxanne went rolling down the hill, a piece of flower box in her hand and her pants around her ankles.  The goose chased her down the hill.  He stuck out his tongue with his mouth wide open in a hiss.  He was flapping his wings and honking at the top of his lungs.

Pam was oblivious to all that was taking place in the back of the house.  Roxanne, red faced and gasping for air,  stumbled up to her.

Yes, we will miss Roxanne and her funny stories.  She had a big heart for animals and was kind to her family and friends.


Posted by The Sanctuary at Browning Farms at 3:01 PM No comments:

Last Saturday, Pam and I had a booth at Spencer Pride.  It was a beautiful day for the festival and we were excited to celebrate the third anniversary of our first meeting - Spencer Pride 2012. 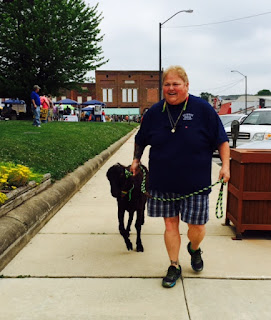 Pam had the bright idea to enter Lloyd the Goat in the pet parade. Well, Lloyd was a hit.  Adults and children alike wanted to pet Lloyd and have a picture taken with the iconic goat.  Pam was so busy hobnobbing with Lloyd's public, that she almost missed the parade!  The announcer stated that the pets were to line up on the south side of the courthouse - no Lloyd.  The announcer said that the parade was to start and the pets were to take a lap around the courthouse block - no Lloyd.  I finally found the two of them on the opposite side of the courthouse talking to a woman and her alpacas!

She and Lloyd ran across the lawn to the south side of the courthouse to catch up with the already started parade.  Poor Lloyd was so tired out from all of his hobnobbing, that he practically had to be dragged around the block!  Lloyd was disappointed that he did not win a prize in the parade, however, he made many new friends and has promised to return to Spencer Pride next year wearing a fabulous outfit that is sure to capture the judge's attention! 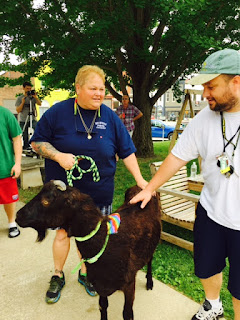 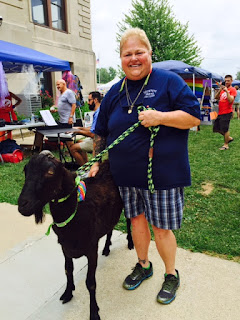 Posted by The Sanctuary at Browning Farms at 6:43 PM No comments:

The Sanctuary at Browning Farms